A Yorkshire businesswoman has won the Diana Award Mentor of the Year at the 2018 SME National Awards in London. Tracy Carpenter, owner of Leeds-based Mint HR, received the award at the prestigious ceremony at Wembley Stadium earlier this month for her work mentoring young people at schools in West Yorkshire. 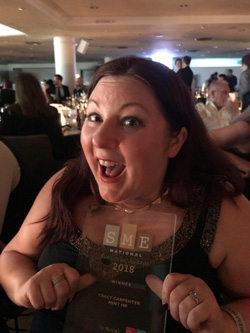 The award is a charity legacy to Diana, Princess of Wales's belief that young people have the power to change the world. Its mission is to foster, develop and inspire positive change in the lives of ordinary young people, and the mentoring programme aims to break down the barriers of social mobility in disengaged young people, with mentors playing a significant role in shaping the lives of others, especially the most vulnerable.

For the last 12 months, Tracy has been visiting schools to work with students on social action projects within the community, such as homelessness, and help them with their employability potential and interview skills.

"I wanted to give something back and I've loved working with these young people and giving them the focus and skills to really stand out, most of whom were just fading into the background. So it feels amazing to get national recognition for doing so!" Tracy explained.

Tracy initially refused when she was asked to enter by both Kirsty Copley, the Youth Facilitator at Batley High School, and Diana Award CEO, Tessy Ojo, but changed her mind only an hour before the deadline.

"I wasnt doing this for an award there are so many volunteers out there giving up their time to do amazing work and at first I felt uncomfortable with the idea of shouting about what I was doing. But I changed my mind at the last minute."

A few weeks later, she received confirmation that she had been short-listed, along with an invitation to attend the ceremony at Wembley Stadium.

"I was so surprised that I actually contacted them to say there must have been some mistake, but I was assured that it was correct."

Still convinced that she wouldn't win, Tracy and her husband decided to go along just for the night out in London.

"When I heard my name being called out as the winner, I couldn't believe it! Volunteering with the Diana Award organisation has been so rewarding. Running my own business and raising two kids of my own has given me the confidence and experience to help these young people as well as the flexibility to fit it into a busy life. It has been a big commitment but worth every minute and I will carry on doing it next year."

More articles about HR issues can be found here, but follow me on LinkedIn for more regular (and less formal!) updates :-)